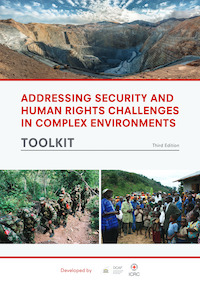 a) The identification of key interlocutors within the host government may be challenging, particularly when there is a change of government or when responsibility for security is devolved to regional or local levels. Furthermore, more than one government agency may work on the same issues.

Stakeholder mapping should seek to answer the following questions:

Engage widely within government. There will always be differing attitudes within the host government; it is likely that there will be some government actors willing to engage with companies to address challenges.

Establish a broad-based security working group at the local level

b) The host government may not see any added value in engaging in a VPs in-country process.

Foster commitment to the VPs within different levels of government

Be informed on national laws and establish links with the VPs

Work with other stakeholders

Be creative and go beyond VPs text and language

In 2003, an in-country multi-stakeholder process was initiated in Colombia by four companies and one industry association interested in promoting respect for human rights in the context of extractive sector operations. Collectively, they approached three embassies to help facilitate a dialogue with the Office of the Vice-President, the Ministry of Foreign Affairs, and the Ministry of Defence to advocate for the importance of the Voluntary Principles Initiative for Colombia. This dialogue eventually led to the creation, in September 2003, of the “National Committee for the Implementation of the Voluntary Principles”, which in 2008 was renamed the Mining and Energy Committee (CME).

The CME is a Colombia-based multi-stakeholder forum that studies, debates, and makes recommendations on best practices concerning security-related human rights issues.[2] It also provides a forum for dialogue between companies, the Colombian Government, embassies and civil society organisations (CSOs) regarding human rights and International Humanitarian Law (IHL)-related issues in the extractive and non-extractive industry. In 2015, participants in the CME include eight Colombian Government agencies,[3] national and international oil companies, four VPs member governments with embassies in Colombia and one civil society organisation. The CME obtains funding through annual fee payments made by company members and grants provided by a few VPs governments.

The CME has established several working groups charged with producing recommendations based on the needs of its members. For example, the CME has a Working Group on Companies and Public Security Forces, which is currently working with the defence sector to institutionalise risk assessment practices. In 2012, this Working Group developed a recommendation on how CME members could contribute to the Ministry of Defence’s Human Rights and International Humanitarian Law Public Policy which includes training public security forces on human rights and IHL, operational discipline, defence, attention to vulnerable groups and cooperation, and makes a commitment to the VPs. Similarly, the Contractors Working Group has developed practical tools for companies in managing private security, through the translation of the VPs into concrete on-the-ground actions that are specific to Colombia. This Group is also working to promote understanding of the connections between VPs implementation and related initiatives such as the International Code of Conduct for Private Security Service Providers.

Key factors that have made the CME successful:

c) The lack of coordination between national and local authorities may undermine agreements reached by companies at the national level when implemented at the local level.

Conduct in-depth situation analysis in order to understand how the host government is organised and the way authority and responsibilities are devolved from the national to the regional and/or local authorities. This in-depth situation analysis can be led in-house and/or can be built through consultations with other knowledgeable stakeholders. It should include an analysis of the host state institutions, legal framework, political structure, formal and informal systems. The PESTLES framework is one useful method for classifying the information gathered.

A PESTLES analysis is a macro-level assessment tool designed to give a broad contextual understanding of the state or region where security sector reform activities are planned, through the analysis of a multiplicity of specific but interrelated indicators. For further details see: http://issat.dcaf.ch/[4].

Conduct and review a risk assessment to make sure coordination challenges are acknowledged as a risk and their implications are analysed.

Work with the host government both at the national and at the local level, including security officials

Work with other stakeholders to increase coordination between security actors

Support the establishment of a VPs in-country process. Such a process should include actors at different government levels. It should promote coordination among relevant national and local stakeholders; follow up on agreements and monitor progress. (See Challenge 1.1.b.)